Order of the Arrow in Northwest Georgia began after a driving force from C.H. Westin, and soon after in 1945 records show that Waguli Lodge 318 began after an induction team from Atlanta Area Council conducted the first call out ceremony for  Northwest Georgia Council. The call out ceremony was comprised of members from Egwa Tawa Dee lodge #129 who traveled to Camp Sidney Dew to conduct the lodge’s first callout ceremony. Here, 44 young scouts became scouts for our great and honored Order. 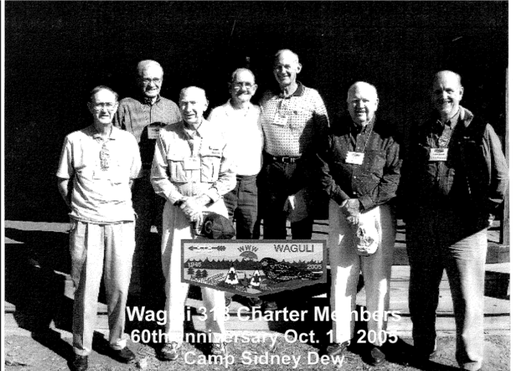 Waguli Charter Member Reunion
The first ordeal experience for Waguli Arrowmen consisted of One raw egg, one slice of bread, two matches, and no lunch
The first ordeal ceremony team was Gene McRae as Chingachgook, Marlin white as Meteu, Doug Smith as Nutiket, Bufford Hill as Kitchkinet.
The First Brotherhood team consisted of Devine Hubbs Sr. as Medicine Man, Bufford Hill was Chief(Allowat Sakima), and Robert Campbell was on the team.
​
Waguli is roughly translated to "whippoorwill" which is the lodge totem, in fact Buford Hill has stated that it's original meaning in Cherokee was  “ Whippoorwill searching for berries and a rare bird found in forested areas along the south and eastern portion of the United States. Whippoorwill populations are generally small and limited in size, however Camp Sidney Dew is home to a large populations of whippoorwills. Because of this, George Dorsey suggested it to be our Lodge Totem, and when the lodge chartered the whippoorwill became the Totem for the Lodge.